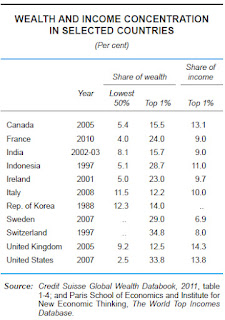 The UNCTAD 2012 report entitled Policies for Inclusive and Balanced Growth, released on 12 September, 2012, has warned developed countries who are in a hurry to shift towards the policy of government budget cuts from the policy of economic stimulus measures. Insufficient State spending as a part of austerity measures adopted in the developed countries has slackened their domestic demand. Global growth has reduced from 4.1 per cent in 2010 to 2.7 per cent in 2011. As a result, export prospects of developing countries have been affected. Restraining demand in the midst of recession is a misdiagnosis of the causes of crisis, which the new report has cautioned.

The UNCTAD 2012 report has found that countries like India and Turkey have suffered due to weaker demand from developed countries and because of the policy of monetary tightening they pursued in 2011 for curtailing increase in inflation and asset prices. In the absence of external demand, economic growth in India [which used to be 7.5 percent in 2008, 7.0 percent in 2009, 9.0 percent in 2010, 7.0 percent in 2011 and 6.0 percent (forecast) in 2012] could be maintained because of continuous expansion of household incomes and consumption that boosted domestic demand. However, aggressive monetary tightening has affected private domestic investment, which has slowed down the Indian economy in the recent times.

India's Gini coefficient* for consumption has risen from 0.31 in 1993-94 to 0.36 in 2009-10. A rising trend in inequality could be attributed to gains from growth being concentrated among surplus-takers (which include profits, rents and financial incomes). The UNCTAD 2012 report has observed that the manufacturing sector in India could not generate sufficient employment opportunities and most of the labour force is still employed in the low remuneration informal sector and low productivity agriculture. Wage shares in total national income in the organized sector have been falling since the early 1990s.
The top 1 percent held a much larger share of the total wealth of the economy than the bottom 50 percent. For example, 15.7 percent compared with 8.1 percent in India in 2002-03 and their share of wealth is significantly higher than their share of income (9.0 percent share in total income by top 1 percent in India in 2002-03)-see the table above. The UNCTAD report has argued that high inequality deprives people of access to education and credit and prevents the expansion of domestic markets.

Apart from India, Eastern and South East Asian countries have witnessed a rise in personal income inequality between 1980 and 1995. Economic growth in China has come at the cost of rising income inequality since 1980s and the trend has still continued.

The UNCTAD report has advocated for government backed fiscal and labour market policies, which can reduce income inequality. It has given example of Latin America and other developing countries where progressive taxation and increased public investment have contributed to inclusive growth. [For example, in Latin America public expenditure on education rose from 4.1 percent to 5.2 percent of GDP between 2000 and 2010]. The UNCTAD 2012 report has informed that in the 1980s and 1990s, fiscal policies tended to reduce the share of direct income taxes in government revenues while increasing the share of indirect taxes such as value added tax. While criticizing the neoliberal policy of reducing the "size of the State", the report has stated that lower taxation of high-income groups and public spending restraint did not generally result in greater investment, either public or private.

The UNCTAD 2012 report has commended the Indian Government for adopting a $5 billion plan to provide free medical care to the poorest 50 percent of the population in 2012. If generic drugs were to be used in the programme then the policy of the Government would improve access to health care and strengthen the domestic pharmaceutical industry, anticipated the report.

* A Gini of zero denotes absolute equality, while a value of 1 (or 100 on the percentile scale) means absolute inequality.

Key findings of the UNCTAD 2012 report:

Rising inequality is not inevitable, report says – and economies will perform better with more even income distribution
http://unctad.org/en/pages/PressRelease.aspx?OriginalVersionID=96&Sitemap_x0020_Taxonomy=20;#UNCTAD%20Home&Product_x0020_Taxonomy=1566;#Press%20Release

Report says reducing inequality through fiscal and incomes policies is key for growth and development,
http://unctad.org/en/pages/PressRelease.aspx?OriginalVersionID=97&Sitemap_x0020_Taxonomy=20;#UNCTAD%20Home&Product_x0020_Taxonomy=1566;#Press%20Release