India’s nutrition and hunger data is too old 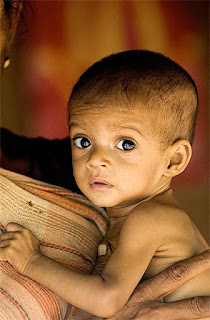 Two important international reports on undernutrition i.e. 2012 Global Hunger Index (GHI) report from IFPRI, Concern Worldwide & Welthungerhilfe and The Nutrition Barometer report from Save the Children & World Vision (published in 2012) have criticized the Indian government for not monitoring the state of malnutrition and hunger since the time the last National Family Health Survey-3 (NFHS-3) got published in 2005-06. At home, the Government has throttled one of the most authentic and revered survey, which used to collect and collate health and nutrition related data. It has, however, taken insufficient measures so far to compensate for the inadequacy of such data.

The 2012 Global Hunger Index report has confessed that India’s latest Global Hunger Index (GHI) score (=22.9 and rank: 65) is based partly on outdated data: "although it includes relatively recent child mortality data from 2010, FAO’s most recent data on undernourishment are for 2006–08, and India’s latest available nationally representative data on child underweight were collected in 2005–06". The 2012 GHI report has stated that due to dearth of child nutrition data, "any recent progress in the fight against child undernutrition cannot be taken into account by the 2012 GHI". India is in need to produce data at regular intervals by monitoring systems for child undernutrition and related indicators, recommended the 2012 GHI report.

The Nutrition Barometer report (2012) while finding that India, Democratic Republic of Congo (DRC) and Yemen have performed the worst in reducing malnutrition, with frail commitments and frail outcomes, has asked for a new population-based, nationally representative survey to check what has happened to nutrition since 2005–06.

The National Family Health Survey (NFHS) has met a similar fate like NCEUS reports after the Ministry of Health and Family Welfare decided to discontinue the Health Survey, the fourth round of which was about to take place in 2012-13. The same Ministry now wants to launch an integrated national health survey (NHS) thereby replacing the three existing ones—NFHS, the district-level health survey (DLHS) and the Annual Health Survey (AHS). Despite objections being raised by leading economists, health activists and nutrition experts, the Government has taken off the Internet all the data pertaining to NFHS-1, NFHS-2 and NFHS-3. The official website of NFHS is no more working, but people may try downloading the data from the website: http://www.rchiips.org/NFHS/factsheet.shtml (last accessed on 12 October, 2012). All this clearly points to the fact that Government is not eager to disclose information to its own citizens proactively.

NFHS-1 (1992-93), NFHS-2 (1998-99) and NFHS-3 (2005-06) provided information on fertility, mortality, family planning, HIV-related knowledge, and important aspects of nutrition, health, and health care. All the three surveys were coordinated by the International Institute for Population Sciences (IIPS) under the aegis of the Government of India.

Some of the major findings of NFHS-3 are presented below:

•    In India, only 44 percent of children aged 12-23 months are fully vaccinated, and 5 percent have not received any vaccinations. More than half of women are married before the legal minimum age of 18. Among women age 20-49, the median age at first marriage is 17.2 years.

•    More than one-third (36 percent) of women age 15-49 in India have a body mass index-BMI (a measure of nutritional status, BMI is defined as weight in kilograms divided by height in metres squared, kg/m2) below 18.5 indicating chronic nutritional deficiency, including 16 percent who are moderately to severely thin.

•    Nationally, 34 percent of men age 15-49 have a BMI below18.5, and more than half of these men are moderately to severely undernourished. The highest proportions of undernourished men, two in five, are in Madhya Pradesh and Rajasthan.

•    Anaemia is a major health problem for adults as well as children, affecting 55 percent of women and 24 percent of men.


Corrigendum: Through my interaction with Dr. Prema Ramachandran (Director, Nutrition Foundation of India, New Delhi, http://nutritionfoundationofindia.res.in/) during the National Conference on Right to Food, organized by National Human Rights Commission (NHRC) on 4 January, 2013, I came to know that Annual Health Survey (AHS) done under Ministry of Health & Family Welfare in collaboration with the Registrar General of India (RGI) would be covering all the districts in 9 states of India to assess health and nutrition status of Indian population. The District Level Household and Facility Survey (DLHS) will be undertaken in rest of the states/ UTs where Annual Health Survey (AHS) is not being done. It has been decided that DLHS-4 would cover Clinical, Anthropometric and Biochemical (CAB) component as in AHS. The AHS and DLHS would fill the current void of nutrition related data.