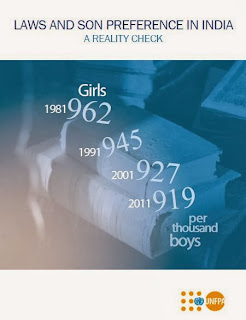 During the month of November when a young journalist was allegedly sexually assaulted by the editor of a magazine where she worked (at Thinkfest in Goa), a report on gender prejudice of Indian laws was launched by the United Nations Population Fund (UNFPA) in New Delhi. Written from a gender perspective by senior advocate Kirti Singh, the report entitled 'The Law and Son Preference in India: A Reality Check' claims that most Indian laws be it prevention of dowry law, anti sexual assault law or inheritance law, actually go against the interests of women. Some Indian laws instead of curtailing actually perpetuate gender discrimination in the society.

The UNFPA report has reviewed through gender lens laws relating to women including dowry, inheritance, child marriage, sex-selection and sexual assault so as to assess the inherent flaws in them and how they promote gender injustice. It finds that the laws themselves, and their interpretation, non-implementation or absence, may directly or indirectly propagate son preference in the society. Laws such as the Goa Law on Polygamy that permits a second marriage for the husband when there is no son from the first marriage, actually promote gender injustice and son preference. As a result of the prevailing gender discrimination in India, child sex ratio, defined as number of girls for every 1000 boys in the 0-6 age group, has worsened over the decades.

While in some cases laws that promote gender equality are not effectively implemented (such as the PCPNDT Act* and Dowry Prohibition Act) by either the central or state governments, laws are missing in critical areas like honour crimes and marital property rights. A separate law on honour killings is essential to ensure that khap panchayats and families victimizing couples are brought to book. Since there is absence of community of property law in India between a husband and a wife and the non-financial and financial contributions of a woman to a household are not recognized, a standalone comprehensive legislation in this area should be urgently enacted, recommends the present report.

As per the amended rape law, the report clarifies that if a woman remains passive, this alone will not imply consent to the sexual intercourse in question. Marital rape is still not recognised in the law and only sexual assault of girls below the age of 15 years within marriage is considered a crime under the Indian Penal Code (IPC).

New Report Reviews Key Laws on Women and Girls and Their Impact on Son Preference In India, 18 November, 2013,
http://www.unfpa.org/public/home/news/pid/15748

The Sexual Harassment of Women at Workplace Act-2013


The Sexual Harassment of Women at Workplace (Prevention, Prohibition and Redressal) Rules, 2013