Pension Parishad gets support from politicians across party lines 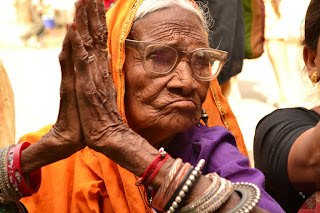 At the end of 5 days dharna (7-11 May, 2012) by Pension Parishad that was held at Jantar Mantar, New Delhi, a press meet was held at Press Club of India on 11 May, 2012. Leader of the campaign Aruna Roy (MKSS) informed the media that more than 3000 persons from 22 states stayed during the 5 days dharna so as to demand for universal old age pension entitlement. She said that unorganized sector workers comprise 93 percent of the workforce but have no access to social security benefits. Nearly 10 percent of the Indian population is above 60 years. Putting pressure on the electoral system is essential for realizing the old age pension entitlement. Politicians across party lines visited the dharna site so as to express their solidarity on the demand for universal old age pension. On the 3rd day of the dharna, Minister of Rural Development Jairam Ramesh visited the dharna site of Pension Parishad and promised that he would try to raise the monthly pension amount under the Indira Gandhi National Old Age Pension Scheme (IGNOAPS) from Rs. 200/- to Rs. 500/- and remove the distinction between APL and BPL. He also said that old age limit would be brought to 60 years for the universal old age pension. Raghuvansh Prasad Singh (RJD) said that monthly pension should be increased to Rs. 3000/-. Aruna Roy informed that for 3 days (7-9 May, 2012) during the dharna, public hearings on issues related to the elderly, the marginalized & vulnerable groups and public accountability took place.

* Pension should be linked to the Consumer Price Index

* Pensions should be disbursed on a specific day each month

* Simplify documentation for getting pension

* Transgender, sex worker and other vulnerable and marginalized communities not covered by any form of social security must be given a pension

* Old age people who fall ill should be given free medicines

Resolutions passed on Right to Food on the 4th day of dharna are:

* Include pulses and edible oil under PDS

Aruna Roy complained that despite Baba Adhav receiving the Times of India Lifetime award, not much press coverage was given by the latter to the former during the pension dharna [see: Baba Adhav to receive ToI social impact lifetime achievement award-Rukmini Shrinivasan, The Times of India, 30 September, 2011, http://articles.timesofindia.indiatimes.com/2011-09-30/mumbai/30229977_1_baba-adhav-social-activist-ek-panavtha]. She said that a delegation would try to meet UPA chairperson Sonia Gandhi. She, however, refuted that National Advisory Council (NAC) is the platform from where she participated in the 5 days dharna. She said that there is a long way to go before the policy on old age pension becomes a legislation.

Vimla Ben, an activist associated with Pension Parishad said that slums in Delhi exhibit much poorer living conditions than the villages in rural areas. Sanitation condition in slums has reached its nadir. A report produced by her organization, which was submitted to Rakesh Mehta of Delhi Government revealed that the distinction between APL and BPL under the PDS has created rift among the population. Elderly population is the most neglected section among the population.

Baba Adhav, veteran leader of unorganised workers in Maharashtra, said that the objective of Social Security Act 2008 was to provide social security at old age, providing identity cards to unorganized sector workers and disease relief coverage. Even after 4 years of the passing of the Social Security Act, government has failed to provide social security to unorganized sector workers. The demand for pension is related to social justice. From Pune, 25 hamal workers came to Delhi on motorcycles to join the dharna at Jantar Mantar. He said that 22 Members of Parliament (MPs) from various political parties visited the dharna venue. Although Jairam Ramesh said that a monthly pension of Rs. 2000/- is too high but he was ready for a monthly pension of Rs. 500/-. Expenditure made by jail authorities on a prisoner is higher than what the government spends on a pensioner. He said that Congress MP Manick Tagore got 40 signatures from his colleagues to be submitted to the PM so as to demand universal old age pension. The President of India has shown her support for the movement and she donated Rs. 15000/- to Pension Parishad. Pension should become a right, Baba Adhav emphasized. Pension Parishad would try to reach every district of the country. Since journalists are not covered by pension, so they too should become part of the movement. There is an obligation on the part of privileged classes to pay for pension of unorganized sector workers. He gave the example of South Africa where pension system is quite strong and was recently visited by the President.

Prabhat Patnaik (former member of the Kerala State Planning Board and ex-faculty member JNU) said that the struggle for universal old age pension is led by Aruna Roy and Baba Adhav. He said that people are not simply asking for a rise in pension which is being given to the poor. It is a demand for realization of a Constitutional right. The struggle is significant since it is for realizing a Constitutional right to life. Right is universal—it makes no distinction between APL and BPL. If pension becomes a right, adequate means has to become the objective. That is why Rs. 2000/- per month was demanded by Pension Parishad. Once pension becomes a right, it is incumbent on the government to find resources for pensioners. Prabhat Patnaik asked that if there is a war, won’t the government fight or will it postpone it for next year by giving the excuse of fiscal constraint. The government jolly well has to raise funds for pension if it is a right. Universality of the right compels the government to find resources. Giving of pensions would increase purchasing power of the poor, which in turn would provide stimulus to the economy without worsening the balance of payment (BoP). The historical juncture has come for demanding universal old age pension, Prabhat told.

Ravi Srivastava ((former member of the National Commission on Enterprises in the Unorganised Sector and faculty member JNU) congratulated Pension Parishad for bringing together so many people on the issue of universal pension. He said that there is an attempt to portray such movements as irresponsible in the backdrop of lower growth by a section of the media. Social rights and human rights are denied on similar pretexts when resources are demanded. On 15 May, 2006 the first report submitted by the National Commission for Enterprises in the Unorganized Sector (NCEUS) to the PM was on universal social security for unorganized sector. Due to crisis like accidents, maternity, diseases, workers in this sector fall into poverty trap and destitution. Under the universal social security legislation, the NCEUS demanded coverage of 3 things: life cover (including accidents), health expenses and old age pension. It, therefore, asked the government to spend 0.5 percent of GDP on universal social security for the unorganized sector workers. The earlier UPA government missed a huge opportunity to give universal social security. Since spending on health, education and shelter costs something to the exchequer, a viable strategy is needed to raise resources and taxation becomes essential. Government has to commit to social justice and income redistribution. Recently a committee constituted by the Planning Commission has recommended for health coverage as was done previously by the NCEUS. Ravi Srivastava agreed that pension should be linked to minimum wages. No APL-BPL distinction should be made under the universal old age pension. UPA should not miss the opportunity this time, he added.

Parishad to intensify campaign for universal old-age pension-K Balchand, The Hindu, The Hindu, 12 May, 2012, http://www.thehindu.com/news/national/article3409440.ece

Notes from the Pension Parishad held at TISS,
http://pensionparishad.org/pension/resources/Notes-%20Pension%20Parishad%20-%20TISS-%20April%20,2012.pdf

DIGNITY FOR THE ELDERLY: JOIN THE CAMPAIGN,
http://www.im4change.org/news-alert/dignity-for-the-elderly-join-the-campaign-14893.html

Posted by shambhu at 1:24 AM
Email ThisBlogThis!Share to TwitterShare to FacebookShare to Pinterest