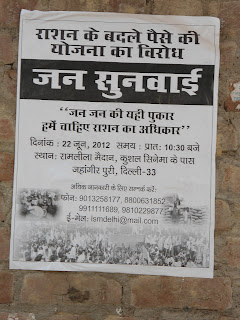 The Delhi Government has recently decided to conduct pilot surveys in Sangam Vihar and Jahangirpuri on cash transfers so as to discontinue the existing public distribution system (PDS). A Jan Sunwai was arranged on behalf of Bhalaswa Lok Shakti Manch (BLSM) and Residents Welfare Association, Jahangirpuri at Ramlila Maidan, G block (near Kushal cinema), Jahangirpuri on 22 June, 2012 so as to oppose Delhi Government’s move to replace the PDS with cash transfers. 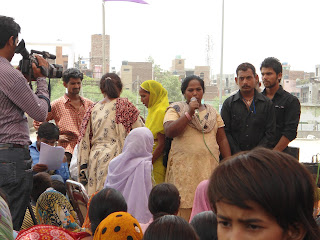 Social activist Pushpa from BLSM said that the Jan Sunwai (public hearing) could not begin at the scheduled time (i.e. 11 am on 22 June 2012) since the administration rejected the permission for holding it at the Ramlila Maidan at the last minute, which was sought since a month back. Right to Food is the demand of the present public hearing. Despite problems associated with the PDS, it should not be dismantled. She informed that in a pilot survey of 100 households during 2011 done by SEWA and IDF in association with Delhi government, residents (women heads) of Raghubir Nagar were given Rs 1000/- per household (comprising 5 members). On 26 April, 2012, UNDP and the Delhi Government along with Swami Sivanand Memorial Institute (SSMI) organized a public meeting in Jahangirpuri in order to convince people about the advantages of cash transfers over PDS. However, through a signature campaign, 4500 signatures were collected from people rejecting the cash transfer scheme. The same have been sent and communicated to the Chief Minister of Delhi, FSO Commissioner, AC (north West) and UNDP along with memorandum of people from Jahangirpuri. Cash transfer would affect the farmers since the minimum support prices (MSP) given to them would be ended when it is introduced. Pushpa asked why the government is not ready to reform the PDS to check leakages and corruption. The ration shops do not follow Section 4 of the Right to Information Act so as to proactively disclose information to ration consumers, she asserted. 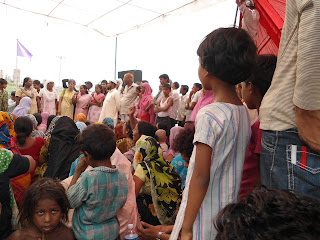 The Jan Sunwai helped one to understand the situation on the ground. Veenu, a woman from the nearby slum, told that her ration card got cancelled recently and the officials at the ration office and the PDS dealer do not listen to her grievances. She asked for PDS instead of cash transfer. She asked for public support to hold a dharna. 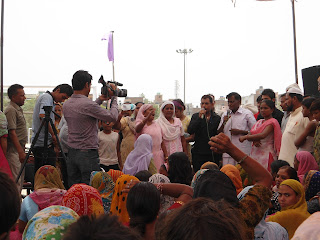 Meenu, a resident of Jahangirpuri, shared how she and other women are struggling to ensure that they receive their entitlements completely and on time. She spoke about ration cards which show that ration has been dispatched but the families have not received any food grains. She also spoke about corruption from ground level ration shopkeepers who sell off the foodgrains in black and are not willing to act on complaints. 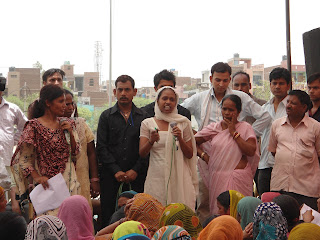 A middle aged woman named Zarina said that despite Public Grievance Commission (PGC) orders, ration cards could not be issued to her. 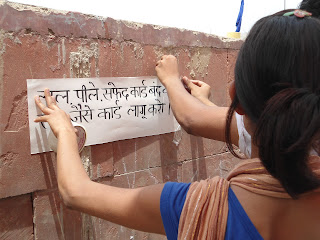 Raju bhai, a daily wage labourer living in Delhi since the last 32 years said that out of his 4 sons, he has lost 2. He has 2 daughters too. It took him 3 years to strike off the names of 2 of his dead sons and add the names of his 2 sons who took birth later. The officials asked for bribe for performing their duties. Full quota of wheat, rice, sugar and kerosene is not supplied by the ration shops. Old people are cheated by the ration dealers and are made to wait in the queue for long hours. He shouted the slogan: “Paisa Nahi Chahiye, Ration Chahiye” (Give us ration, don’t give us cash). 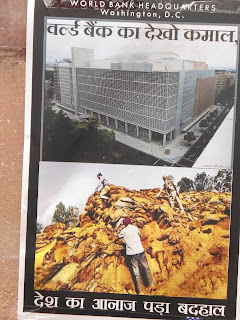 Sushila ji, a woman from the slum said that despite being a poor, she does not have a card since 5 years. She has requested the officials and filled up the forms several times but all in vain. Given her economic status, it is difficult to pay bribe. 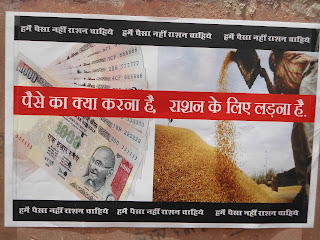 Zahir Bhai, a resident of Jahangirpuri, alleged that the money given by the Central Government has not been utilized properly by the Delhi State Government. Despite identification of households, only a few could receive the Antyodaya Anna Yojana card (red card). 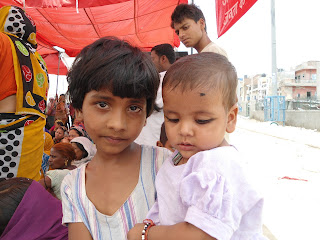 Pushpa, a social activist from Satark Nagrik Sangathan said that if government is formed by the people, then it should be held accountable to fulfill the need of its people. 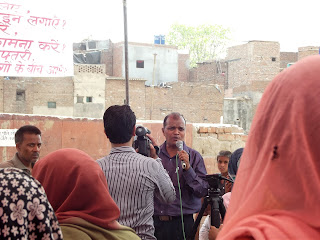 Tara Chand, FSO, Circle 4 Food and Civil Supplies Department who was invited to listen to the grievances of the residents of Jahangirpuri said that people had many complaints and these should be addressed. He said there had been changes in policy which affected the amount of foodgrains received. Due to the instruction coming from the head office, ration shops reduced the monthly allocation of foodgrains for a household overtime: 35kg->32kg->30kg->24kg. He said that cancellation of cards can be checked on the computer records and followed up at ITO. While mentioning that he did not have the capacity to act on their complaints, he advised people to take their complaints to the Food and Supplies Department, ITO. He assured people that he would support them in their work and they could meet him. 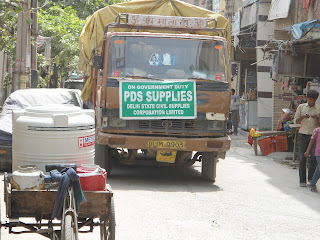 The grievances raised by the people are as follows: 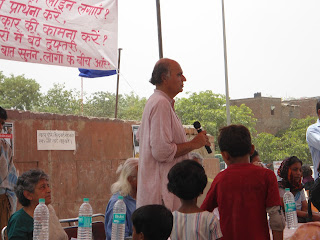 Bharat Dogra, senior journalist said that the public hearing would act like a warning signal to the people that PDS is going to be replaced by cash transfer. Cash transfer is problematic. There are many limitations within the PDS but that does not mean replacing it with cash transfer. The objective of the government should be to minimize leakages in the PDS. In the past, the Government of India made several efforts to strengthen the PDS to improve its delivery mechanism. Pulses should be given under the PDS as their prices have skyrocketed recently. Although storage of foodgrains under the PDS is major concern presently, it should not lead to dismantling the system. The storage problem is short-term. PDS would cushion the consumers against inflation. 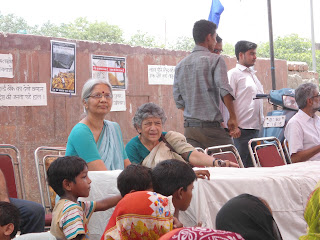 Prof. Utsa Patnaik (ex-faculty member, JNU) informed that 66 lakh tonnes of foodgrains meant for the PDS is kept under the open sky that would get damaged due to rain if not attended to (6.6 m. tonnes of wheat under open sky faces rain fury, admits Centre-Gargi Parsai, The Hindu, 22 June, 2012, http://www.thehindu.com/news/national/article3555824.ece). Export of foodgrains is taking place amidst hunger, she alleged. Cash transfer instead of PDS is a dangerous move. Due to the ongoing inflation, Rs. 1000/- will not be enough to buy foodgrains in the coming days. There is a need for widespread protest against the Government’s move for ending the PDS. She said that PDS used to be universal in the mid-1960s. The neoliberal policies of the Government gave rise to the targeted PDS in 1997. The poverty line suggested by the Planning Commission recently is shocking, Rs. 22.43 per day per person in rural areas and Rs. 28.65 per day per person in urban areas. She also ridiculed government figures that suggested that only 11-12 % of Delhi's population is poor. She said that wrong policies adopted by the Government are responsible for the problems associated with PDS and ration dealers should not be blamed alone. The 62 year old PDS is being jeopardized by the people at the top. She ended by saying that people should take their demands further and question those ruling over them. She appealed that people should take forward their demands to the streets of Parliament.

Prof. Ritu Priya (JNU) said that the problem with the PDS is not specific to Delhi and is widespread across the country. The Prime Minister has found that it is a national shame to have 42 percent of its children as underweight. About one third of Indian women are malnourished. Children borne undernourished cannot lead a healthy life. Rs. 1000/- given as cash transfer to cover monthly expenditure of a household of 5 members is a drop in the ocean. There is enough evidence that per capita expenditure on food has come down to compensate for rise in expenditure on electricity bill, daily commutation expenses, expenses on education, clothes etc. The PM is inclined towards helping the corporate sector instead of the needy.

Dunu Roy (Hazards Centre, http://www.hazardscentre.com/home.html) said that people should demand for a universal PDS and there should be one type of card instead of yellow card (for BPL), red card (for Antyodaya Anna Yojana) and white card (for APL). The next step for the residents should to meet the local councilor and subsequently the MLA and the MP. 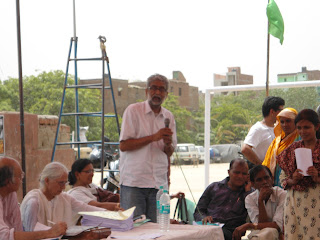 Gautam Navlakha (human rights activist) said that a united front should be made for protest demonstration in front of the Parliament against the Delhi Government’s move to replace the PDS with cash transfer.

Do Poor People in Delhi want to change from PDS to Cash Transfers?-A Study conducted by SEWA Delhi, October 2009,
http://www.sewabharat.org/Delhi%20cash%20transfers%20english.pdf

Jahangirpuri residents to protest against cash in place of food-Naziya Alvi, The Times of India, 22 June, 2012, http://www.im4change.org/rural-news-update/jahangirpuri-residents-to-protest-against-cash-in-place-of-food-naziya-alvi-15836.html