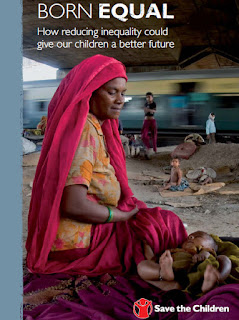 More and more reports, published recently, indicate that the world is witnessing surge in inequality, both income and wealth, barring a few Latin American countries (such as Brazil). Yet inequality has been termed as necessary fallout of economic growth. According to conventional economics, rise in inequality provide incentives to those who are more capable of managing the resources. It is the fittest (in this case- capitalist) who survives in this race.

However, a lesser known report entitled Born Equal: How reducing inequality could give our children a better future (2012), which has been released recently by Save the Children shows that growing gaps between the richest and the poorest children actually threatens children’s health and development. After studying 32 countries, the report demonstrates that children born into the richest households have access to 35 times the resources of the poorest. Children born in rich households get better healthcare, more nutritious food and improved access to school. Such children do not have to start work at an early age. Thus, they are less likely to become child labourers. The report has, therefore, stressed the need for addressing inequality so as to accelerate progress towards achieving the MDGs and to deliver the promise to eradicate extreme global poverty.

While commenting on India, the report mentions that rise in inequality has been quite stark because in 2002 India had four billionaires ($US), which grew to 55 presently. Factors like the country where one is born, one’s skin colour, one’s gender, wealth of one’s parents and other such dimensions determine to a large extent a person’s future and the quality of life s/he would live. A person born as a dalit in India will be twice as likely to live one's entire life in poverty. Dropout rates among children in the scheduled tribe and scheduled caste categories are substantially higher. Save the Children report alleges that India has witnessed reductions in social spending overtime.

Key findings of Save the Children report:

Born Equal: How reducing inequality could give our children a better future (2012), Save the Children,
http://www.savethechildren.org.uk/sites/default/files/images/Born_Equal.pdf

Born Equal? How reducing inequality could give our children a better future by Núria Molina-Gallart, 1 November, 2012, http://blogs.worldbank.org/developmenttalk/born-equal-how-reducing-inequality-could-give-our-children-a-better-future

The threat of inequality to children by Robbie Lawrence, 23 November, 2012, http://www.generation-c.org/the-threat-of-inequality-to-children/

Posted by shambhu at 8:58 AM
Email ThisBlogThis!Share to TwitterShare to FacebookShare to Pinterest