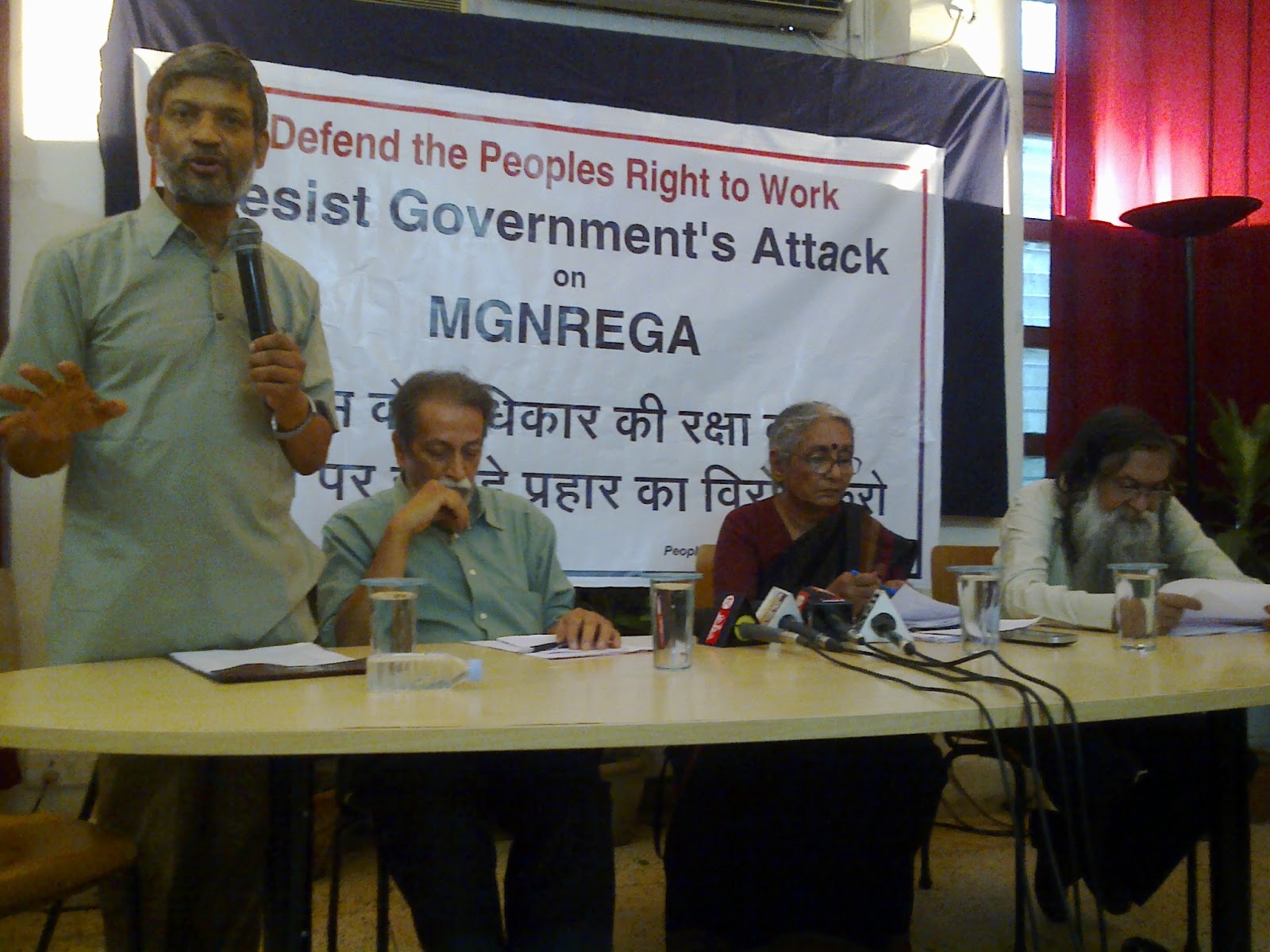 People's Action for Employment Guarantee called a press conference at Indian Women's Press Corps (New Delhi) on 8 October, 2014 to oppose the dilution of Mahatma Gandhi NREGA Act. Addressing the conference, social activist Nikhil Dey informed that prior to the 16th Lok Sabha election, BJP and other major political parties promised to improve the implementation of MGNREGA. However instead of doing so, after the election the NDA Government tried to roll back the job guaranty programme in 3 different ways—a. Budget allocation for the programme has been squeezed despite MGNREGA being demand-based; b. The Government is changing the nature of programme from labour intensive to material intensive; and c. The Act is being converted into a scheme by restricting its implementation in one-third of the blocks in India that are considered as backward.

Nikhil Dey argued that the law cannot be abrogated by the Executive. It is illegal to make changes in the schedule of MGNREGA. The Parliament too cannot be allowed to make amendments in the MGNREGA since the NDA Government at the Centre did not get the mandate to make changes in it when it was voted to power. A recent RTI reveals that due to proposed change in the labour to material ratio, officials at the Ministry of Rural Development apprehend that “5 crore households will be adversely affected by this decision” that goes against the spirit of the Act.

In order to keep the expenditure on MGNREGA (as a proportion GDP) the same as it was in 2007-08, the Government should spend nearly Rs. 60,000 crore to Rs. 65,000 crore annually at present. Dey said that the motive behind changing the labour to material ratio is to allow the entry of contractors. However, the move will also discriminate against villages where unemployment and poverty is high. The marginalized and the primitive tribals will die due to hunger and starvation in the absence of this programme.

Nikhil Dey said that MPs from across the political spectrum will be approached to oppose the dilution of MGNREGA. People shall be mobilised against the changes proposed in MGNREGA. 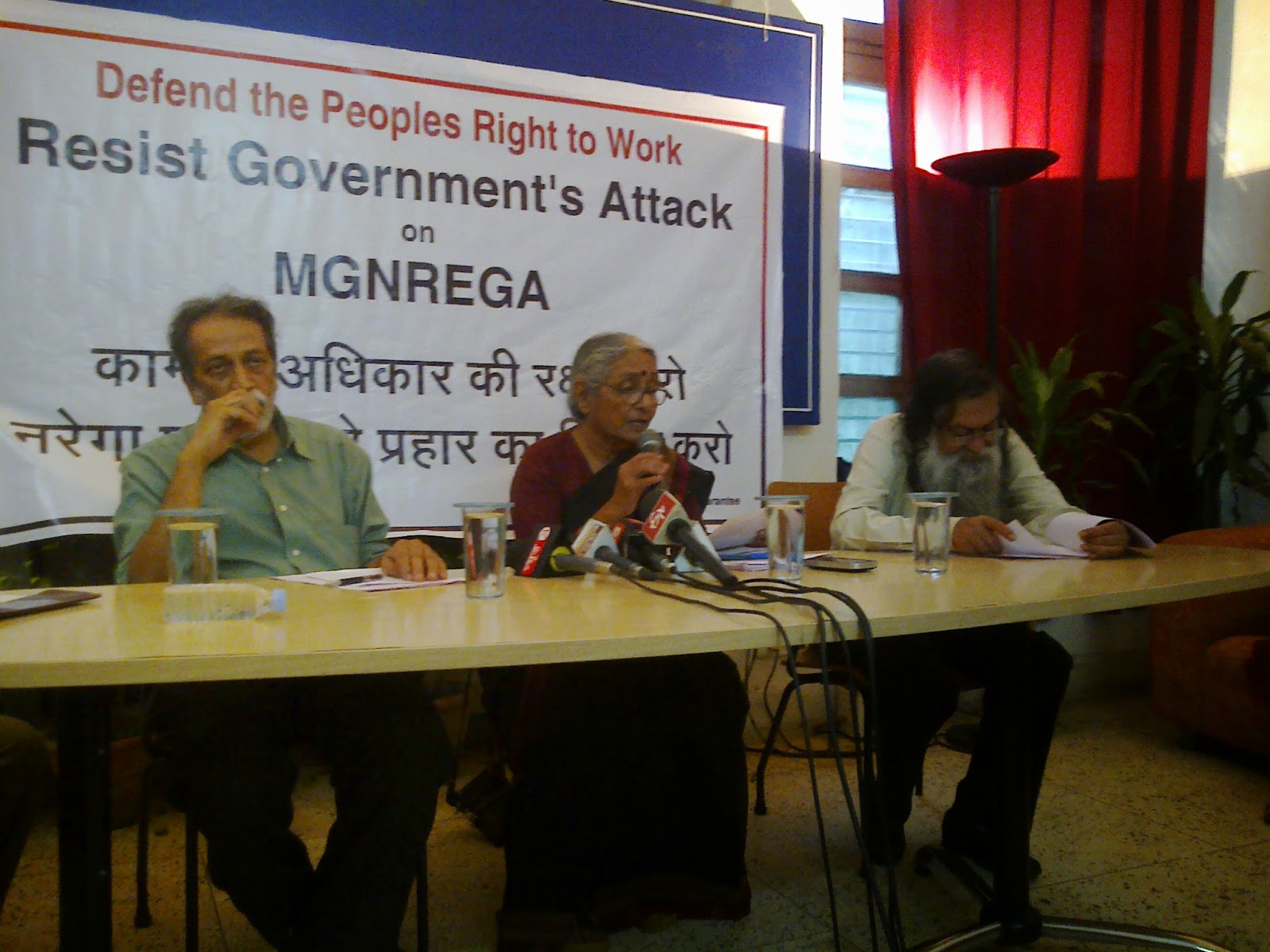 Former member of the National Advisory Council and RTI activist Aruna Roy alleged that the Government is in denial. She said that not all schemes are getting closed down due to the presence of corruption. However, MGNREGA has been systematically targeted since its inception. A letter to the Prime Minister of India opposing the dilution of the Act has been signed by more than 200 eminent citizens. A recent RTI reveals that the Union Rural Development Minister Nitin Gadkari has ordered to make amendment in the schedule for changing the labour to material ratio from the existing 60:40 to 51:49. This will usher in Contractor Raj, which was so far restricted to the real estate sector, anticipated Roy. Despite MGNREGA being demand driven, there has been rationing of funds. By restricting the Act to 1/3rd of the blocks, the Govt. is trying to convert the MGNREGA into a scheme. She argued that poverty cannot be defined geographically. Even in rich cities and locations, there exists poverty and unemployment. A lot many myths have been created to tarnish the Act. It is purely a myth that assets have not been created under the MGNREGA.

Aruna Roy argued that both unemployment and underemployment can be solved via MGNREGA. MGNREGA provided employment to women, SCs and STs. Water bodies could be conserved due to the Act, which helped farming in villages. Financial inclusion of women has happened under the programme since bank accounts could be opened in their names. Almost two-third of the MGNREGA work is related to agriculture. 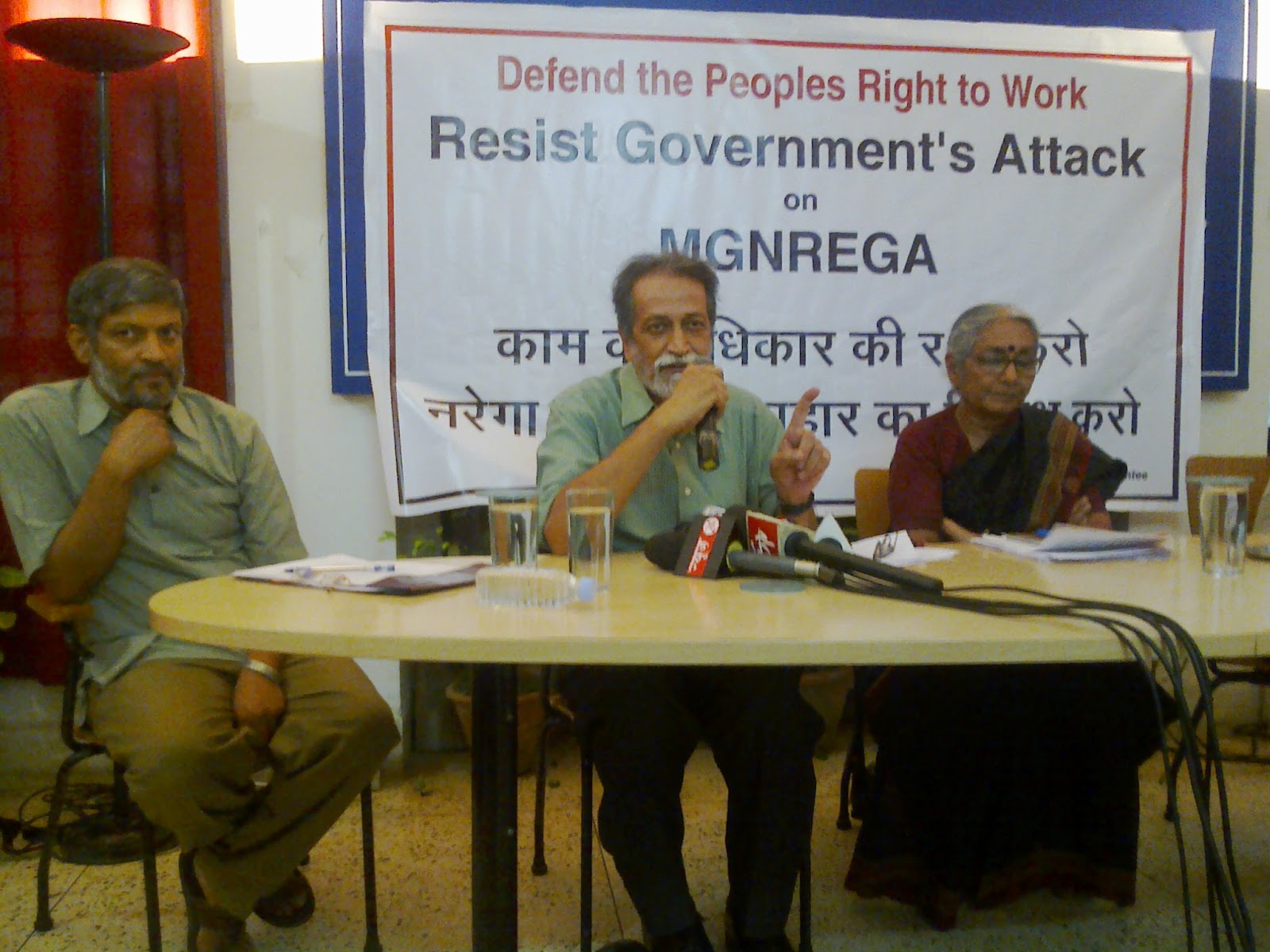 Retired professor of JNU Prabhat Patnaik informed that prior to the MGNREGA, India had food-for-work programme. However, the MGNREGA is different from the former since it is demand driven and also a rights-based programme. One is supposed to receive unemployment compensation if demand for employment is not met. The primary aim of the MGNREGA is to provide employment and not asset creation. Currently the Act is under danger from the Executive. If an amendment is made in the schedule of MGNREGA to change the labour to material ratio, then it will no longer remain a rights-based programme. The recent statement by the Rajasthan Chief Minister to convert the MGNREGA into a food-for-work programme indicates the Act is on the verge of being diluted.

The wages provided to the labourers employed under the MGNREGA generated demand in the village economy via the 'multiplier-effect'. It increased purchasing power of the rural masses during global financial crisis, argued Patnaik. Ideally Rs. 60,000 crore to Rs. 65,000 crore should be allocated annually under the MGNREGA to keep the real allocation constant in the face of inflation. However, presently the programme gets an allocation, which is nearly half of it.

Prof. Patnaik clarified that it is not due to fund crunch that funding to the MGNREGA has been squeezed. The Government has given huge tax concessions to the corporate rich in successive budgets. The Government has enormous amount of foodgrain stock, which is being exported. There is unutilized capacity in the industry. All these indicate that India is a demand constrained economy and, therefore, MGNREGA should not be rolled back.

The Government is presently pressuring the people to reduce demand for employment under the MGNREGA by altogether changing the Act. Commenting on restricting the MGNREGA to 1/3rd of the blocks, Patnaik argued that poor in rich localities cannot be discriminated against poor in backward localities. 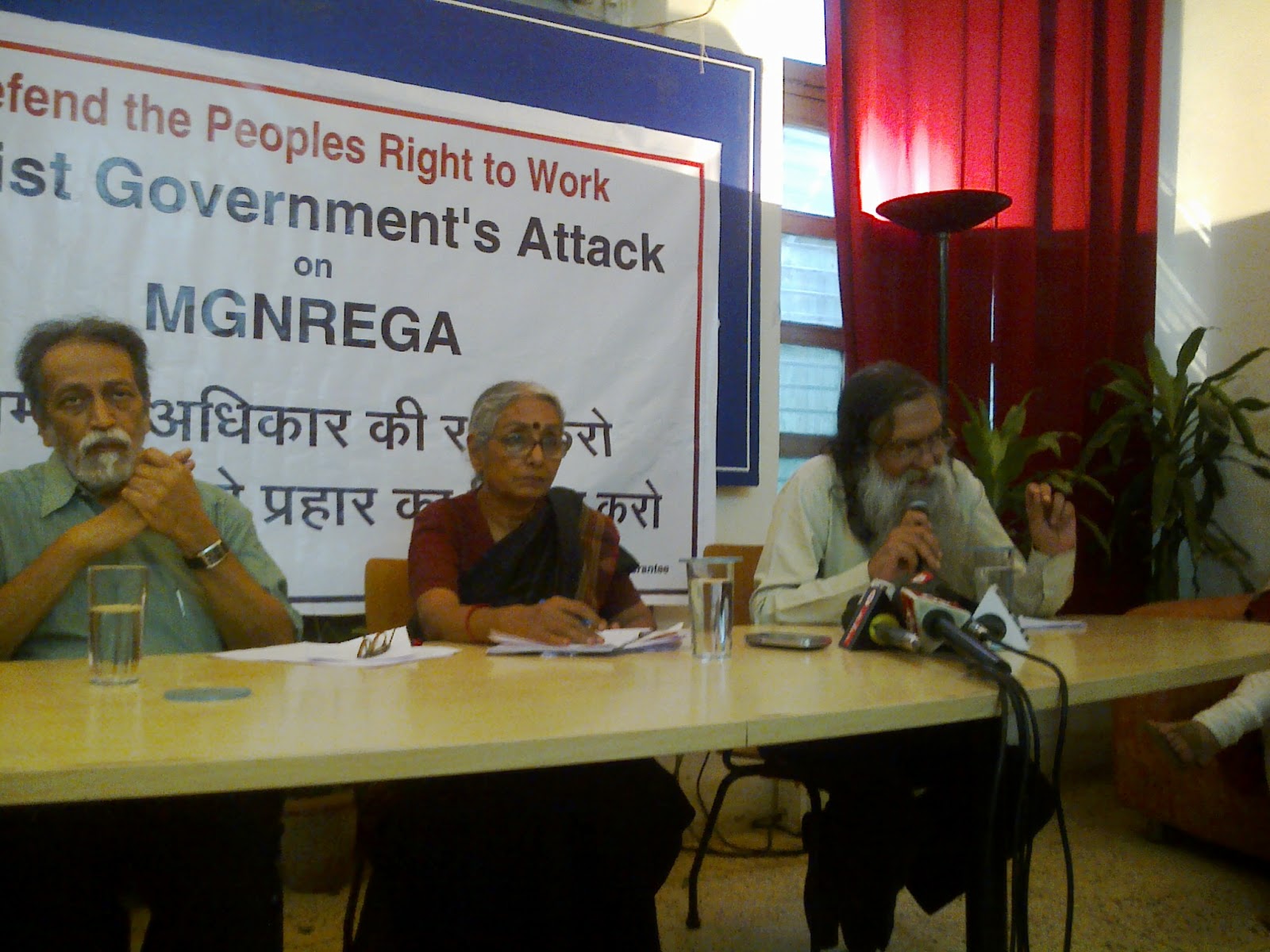 Former Planning Commission member and JNU Professor Abhijit Sen said that he is concerned about the recent developments for a number of reasons—a. MGNREGA is an Act and not a scheme. It is a right which is guaranteed by the Act. Therefore, changes should be made in the legislation first, and the Executive has no right to change it; b. The MGNREGA has faced stiff opposition even during the UPA-2. In many villages, farmers opposed MGNREGA. Wages given to labourers under the MGNREGA strengthened their bargaining power vis-a-vis the landowners and farmers. MGNREGA has changed the political fabric in the rural areas. Therefore, being a political issue, the Executive has no right to change it; c. The MGNREGA has been underestimated. Those who are against it say that it has increased the cost of production. Some of it is exaggeration. For example, it is the growing construction sector in Bihar that absorbed labourers in that state, and not the MGNREGA, due to which agriculture in Punjab suffered.

Abhijit Sen informed that there used to be a number of employment schemes running in the country prior to the MGNREGA. Expenditure on the Jawahar Rozgar Yojana (JRY) as a proportion of GDP prior to 2004 had been higher as compared to the expenditure made on the MGNREGA (as % of GDP). Many of the sample surveys done earlier did not show significant increase in employment under the JRY. However, NSS surveys surely indicate rise in employment under MGNREGA. Employment generation has been the main objective of the MGNREGA and not asset creation. However, there is evidence that more assets are being created under the programme lately. At the time when Prof. Sen left Planning Commission, the preliminary findings of the programme evaluation of asset creation under MGNREGA revealed more assets are being created under the Act. He said that amendments to the MGNREGA is a political matter and, therefore, it cannot be left to the Executive.

Abhijit Sen clarified that the proposed changes in the schedule of MGNREGA is different from the changes in guidelines that was recommended by Dr. Mihir Shah of Planning Commission earlier. He said that MGNREGA 2.0 involved an open and transparent consultation process. It gave more powers to the panchayats in opting the type of work required in their respective villages. 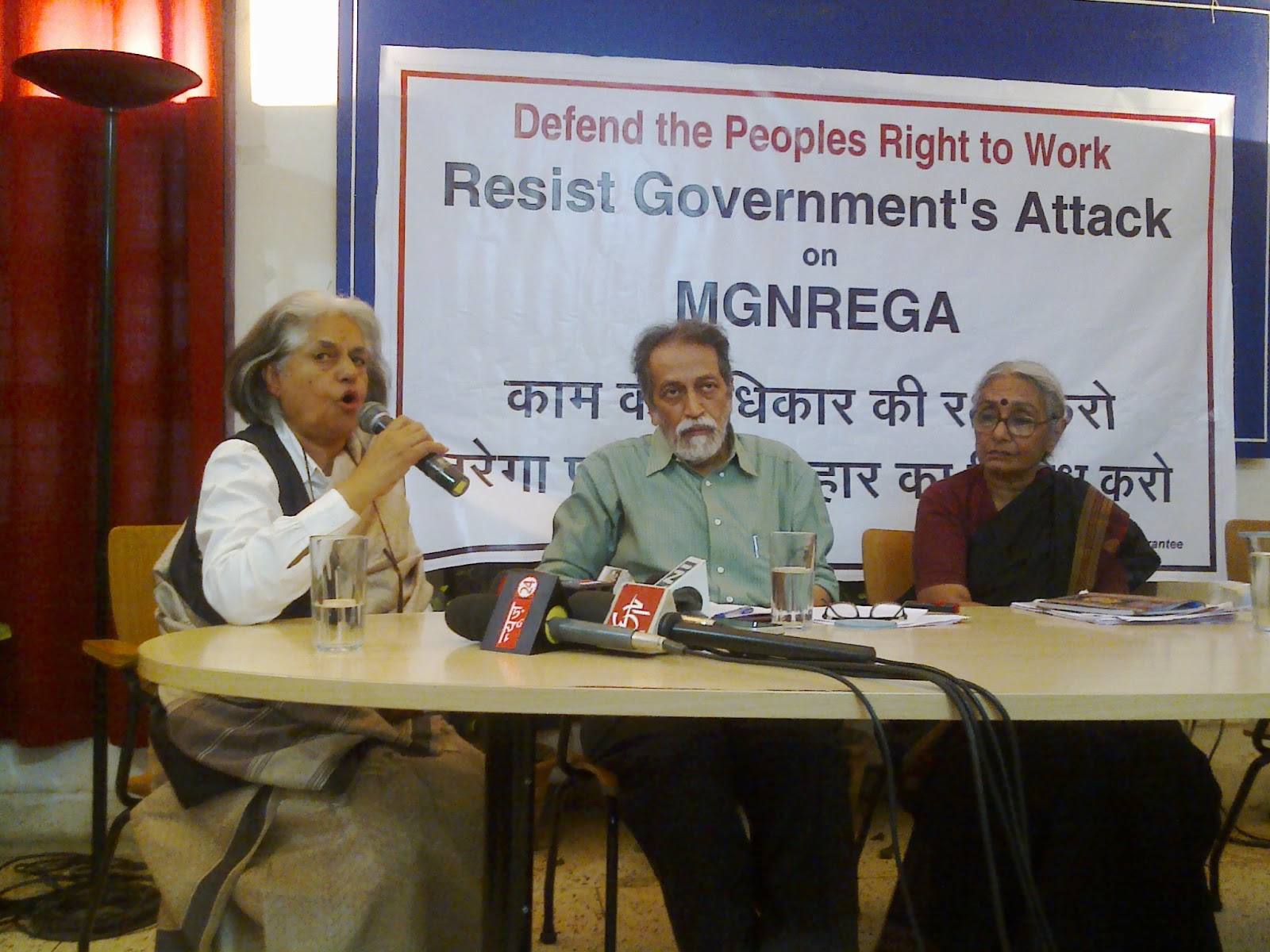 Noted lawyer and Additional Solicitor General of India Indira Jaising informed that various senior bureaucrats have agreed that the MGNREGA contributed to the welfare of the poor. Corruption cases in MGNREGA in states of Bihar and Odisha have taken matters to the court. There is clarity in the Act on what proportion of funds should come from the Centre and the state/s. It is widely documented that the MGNREGA enforces the Directive Principles of State Policy embodied in article 39 and 41. 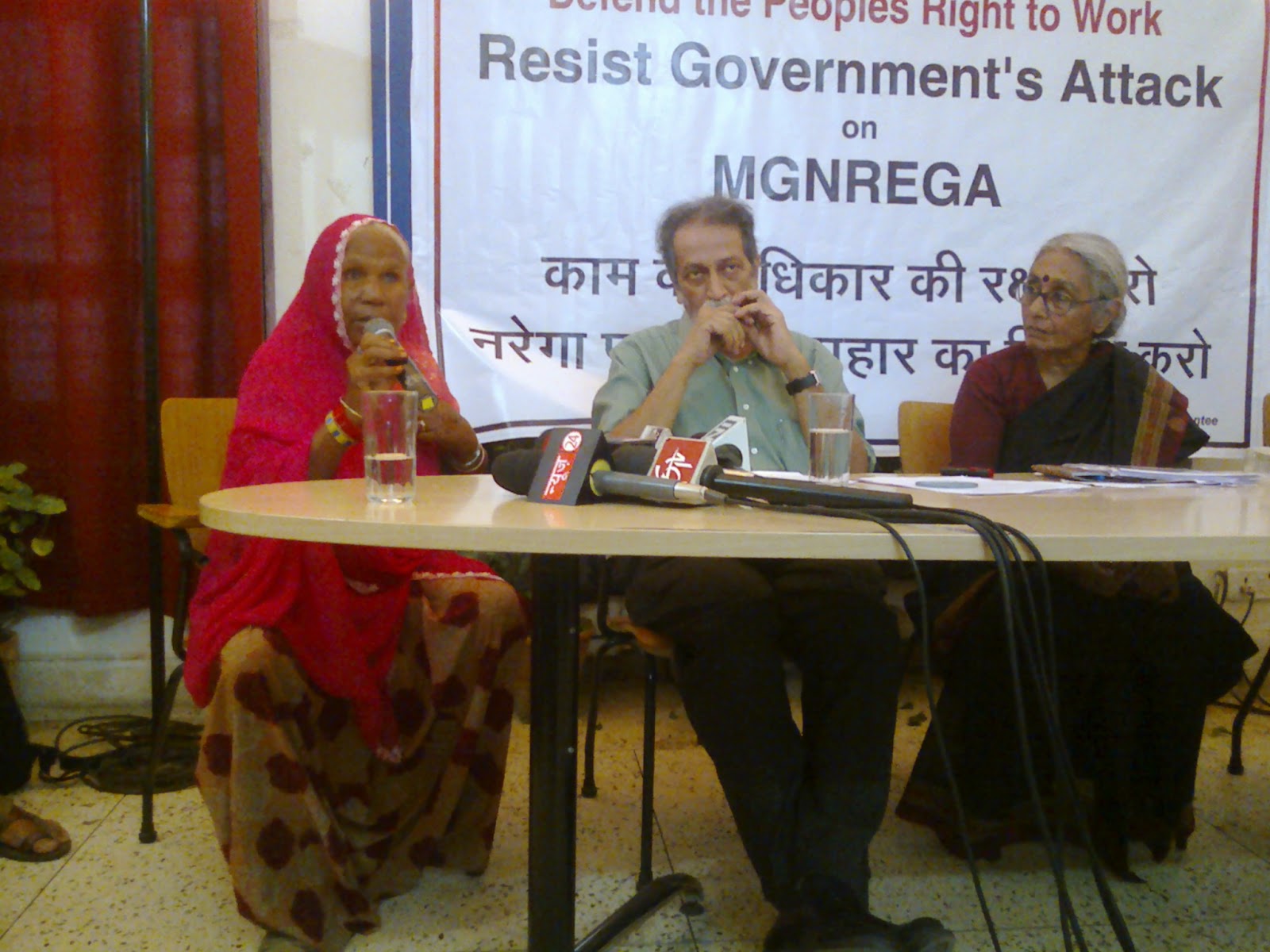 Norati Devi, sarpanch of Harmada panchayat in Ajmer district of Rajasthan said that the MGNREGA provided livelihood security. The programme improved drinking water facility in her village apart from ensuring food security. She demanded that MGNREGA should not be rolled back since many people will become unemployed and fall into poverty in the absence of this Act.

For more information, please check the links below:

Proposed changes to rural job scheme will hit 5 cr households, say activists, The Hindu Business Line, 8 October, 2014, http://www.thehindubusinessline.com/industry-and-economy/proposed-changes-to-rural-job-scheme-will-hit-5-cr-households-say-activists/article6482199.ece
* While utmost care has been taken in good faith to summarize the main speakers’ views, these may not be exact quotes. Please check with the speakers for verbatim quotes. Advance apologies for any factual error.
Posted by shambhu at 11:48 AM
Email ThisBlogThis!Share to TwitterShare to FacebookShare to Pinterest