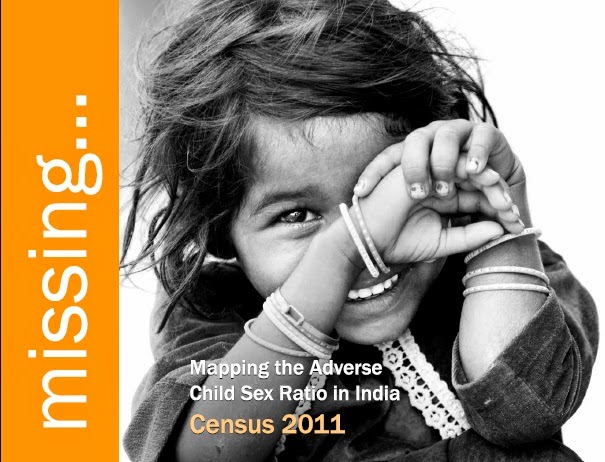 Of these 429 districts, 26 districts exhibited drastic decline (of 50 points or more), and 52 districts reported sharp decline (of 30-49 points).

The report from the office of Registrar General & Census Commissioner shows that 13 out of the 35 states and Union Territories (UTs) have CSR lower than the national average of 918 girls per 1,000 boys in 2011. The CSR ranged from a maximum of 972 in Arunachal Pradesh to a minimum of 834 in Haryana. Jammu & Kashmir, Punjab, Haryana, NCT of Delhi, Chandigarh, Rajasthan, Uttarakhand, Gujarat and Maharashtra have recorded lower than 900 girls per 1,000 boys.

It has been found that although the CSR for most of the tribal districts (having more than 25 percent tribal population) was above the national average of 918, the situation significantly deteriorated in 2011. While in 2001, 120 tribal districts had CSR of 950 or more, in 2011 this figure unfortunately declined to 90 districts.

Due to the weak implementation of Pre-conception and Pre-natal Diagnostic Techniques (Prohibition of Sex Selection) Act, 1994 (PCPNDT Act), in-laws often get to know the sex of the unborn child. Thereafter, it is followed by provision of low quantity & less nutritious food to pregnant and lactating mothers (at the place of in-laws) apart from insufficient attention to maternal health & care, mental and physical torture etc., all of which have a strong negative bearing on women's health and survival and also on their children—unborn or otherwise.

A report published earlier entitled The Law and Son Preference in India: A Reality Check by Advocate Kirti Singh (November, 2013) informs that the two-child norm and the laws and measures to effectuate this norm has resulted in son preference and daughter aversion as most people, if they are forced to have a small family, automatically prefer sons to daughters.

Concerned over the skewed sex ratio, Minister for Women and Child Development Smt. Maneka Gandhi has recently expressed that a programme for Beti Bachao Beti Padhao (Save and Educate the Girl Child) may soon be started in North and western states of India.

Sex ratio is often used as an indicator by social scientists to depict the level of gender discrimination existing in a society. Although women are considered to be biologically stronger than men in terms of survival and life expectancy, gender discrimination often cuts short the life span of the unborn/born female child in a patriarchal set up.

Overall sex ratio, however, may not give a true picture of gender discrimination because due to migration one may find that more women are left behind in the rural areas vis-a-vis men, thereby, yielding high sex ratio figures. Corollary to this, when more men flock to cities and towns for livelihood, it results in low sex ratio in the urban areas.

Instead of relying on the overall sex ratio, experts prefer sex ratio in the age-group 0-6 years so as to assess gender discrimination resulting in female foeticide & infanticide. Also, the latter rules out to a great extent the effect of migration (as discussed earlier). Low child sex ratio (for the age-group 0-6 years) is an outcome of female foeticide, which takes place because sons are preferred to daughters for various reasons including to carry forward the lineage.

Effective advocacy and policy implementations can take place only when good quality data and acceptable gender-based indicators are available. However, one may encounter a variety of problems that are associated with indicator-based study of poverty amongst women such as choice of an appropriate indicator, lack of correlation between various gender based indicators, problems with the sources of data (such as reliability), unavailability of data and qualitative versus quantitative data. Therefore, one should be careful in choosing sex ratio over other gender-based indicators to show gender discrimination.